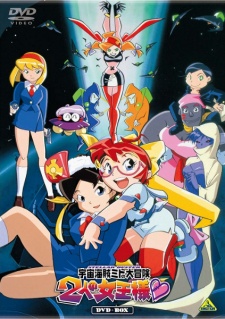 Plot Summary: Aoi was raised as a normal boy on Earth. Little did he know he was the heir apparent to Mito, the Queen-turned-Space-Pirate of an alien race that chooses their sex at puberty! Aoi fell in love with Mutsuki, the police officer who was chasing Mito, and the three of them saved the Universe. The only side effect was that Aoi blossomed into a beautiful young woman. Now a malevolent entity calling herself the true Queen of the Universe appears with enough power to destroy entire planets. Aoi must defend her new throne, but she needs Mutsuki's help. Mutsuki must come to terms with her own feelings for Aoi so they can defend Earth together and become the galaxy's first royal pair of queens.