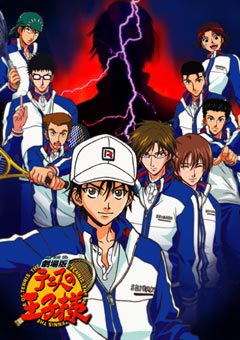 The Prince of Tennis - Two Samurai: The First Game

Plot Summary: "Ryoma's brother?! Here comes Ryoga Echizen!"A conspiracy involving the members of the Aogaku tennis team takes place on a cruise ship. The ship sails along the Pacific, carrying a group of high profile celebrities from all over the world, enjoying their vacations. Among these flamboyant crowds are the members of the Aogaku tennis team, who have been cordially invited to play in the Exhibition Match on the cruise, hosted by a fanatic tennis-lover millionaire, Hikomaro Sakurafubuki.While the members are prepping for the match for the next day, a group of opponents walk up. Ryoma is cold and blunt as usual. But he is encountered by a boy who calls himself Ryoga Echizen, and says that he is Ryoma's elder brother. Everybody is flabbergasted, including Ryoma himself.That night, Tezuka and Oishi are called to Sakurafubuki's room and asked to lose the match tomorrow. The Exhibition Match turns out to be an illegal event, where the rich guests bet millions on the players. Threatened by Sakurafubuki to conspire in the gamble, the team hesitates having nowhere to get away to except for the ocean. Tezuka on the other hand refuses to give in, but what about the rest of the team? What about Ryoma?

The Prince of Tennis - Two Samurai: The First Game