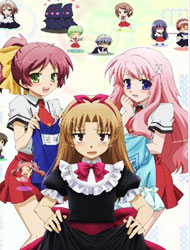 Plot Summary: OVA of Baka to Test to Shoukanjuu which was announced to be released before the start of the second series.